Washington Governor Jay Inslee is among the latest crop of Democrat politicians looking to retake the White House in 2020 with a presidential bid.

It has been much-reported that climate change is expected to be a central policy concern for Inslee’s candidacy. He has gone on record stating that it is not just an environmental issue, but one that affects national security, and economic growth. He also called President Trump’s policies on wind energy ‘moronic.’

While those issues are likely going to be his top priorities, cannabis legalization won't be very far down on his presidential to-do list. After announcing his 2020 campaign, Governor Inslee listed marijuana reform alongside gun control as one of the biggest legislative issues he intends to tackle as president.

“We’ve legalized marijuana,” he announced, referring to the state’s 2012 decision to legalize recreational cannabis. "It’s about time we do it nationwide." 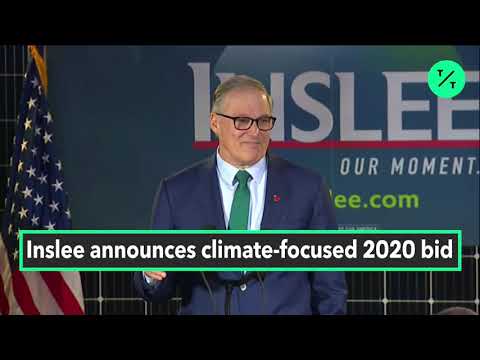 As governor, Inslee signed several pieces of cannabis legislation into law, including one allowing medical patients to purchase immature plants and seeds, and one that changed labeling requirements for marijuana products. He also signed legislation that exempted hemp from the list of controlled substances, and another that allowed hemp cultivation. He did not, however, include funding for the state’s hemp program in to his 2018 budget, making it difficult for the Department of Agriculture to provide oversight for the state's cultivation program.

Inslee also approved limits on the number of plants a medical patient can grow, and imposed penalties for people who consume marijuana while in a moving vehicle. And in 2019, he launched an initiative to expedite the expungements of misdemeanor marijuana possession convictions since 1998.

After receiving an “A” grade from NORML for his cannabis policy as governor, Inslee tweeted that he was “proud” to get top marks and reiterated his desire to legalize the substance nationwide.

Proud to get the top grade on cannabis policy from @NORML. It's time to legalize marijuana nationally. https://t.co/aoZs5jPAmm

However, Inslee didn’t always feel this strongly about the issue. When running for governor in 2012, he had initially opposed the state’s efforts to legalize cannabis, saying that he was in favor of medical marijuana legislation but was “not comfortable” with a recreational cannabis initiative.

During his time as a congressman (from 1989 to 2012), Inslee voted in favor of a number of amendments protecting medical marijuana states from federal intervention. While he did not introduce any cannabis legislation himself, he cosponsored a bill intended to reschedule cannabis.

Inslee became more vocal in his support of medical cannabis after the FDA announced in 2016 that it would not be rescheduling cannabis. In response, Inslee issued a press release stating that he was “disappointed that we don’t have a national standard for at least medical marijuana.”

While appearing on 'Real Time with Bill Maher' in 2018, the governor said, “wouldn’t it be wonderful if the first time Donald Trump actually said something that was actually true...he said he’d leave us alone on our marijuana decriminalization?”

He was also probably one of the few American governors who congratulated Canada on its legalization of cannabis on Twitter last October. And he used that opportunity to also call on Congress to acknowledge that marijuana legislation is working both there and in legal US states.

Inslee has also taken great pride in his state's cannabis culture. In an interview with BuzzFeed News from December 2018, the governor proclaimed that Washington had “the best weed in America.”

So while climate change will remain the primary concern under an Inslee presidency, the governor has proven time and again that sensible cannabis legislation is an important issue for him and would likely remain high on his list of priorities.