Good escalator etiquette is actually bad for the machines themselves and the commuters who use them.

Anyone who rides escalators regularly knows there are some unspoken rules about using them. People who want to stand and ride the revolving stairs should stay on the right-hand side to keep the left side clear for anyone who wants to walk up the escalator. But it turns out, this method is actually unsafe and inefficient.

Researchers, escalator manufacturers and public transport officials all agree: no one should be walking on escalators. Instead, both sides of the escalator should be used for standing. That method actually allows escalators to move more people in less time overall by making better use of each step on the revolving stairs. It also reduces wear on the escalators and makes them safer to ride. By having people stand on one side, we're throwing the machine off-balance and making that half more likely to break down under the extra strain.

If you're like the late comedian Mitch Hedberg, you might think that escalators can't really break; they just become stairs. Well, think again. Broken escalators can actually turn into subterranean rollercoasters that hurtle people toward the ground. That's basically what happened when the escalator in the clip below broke down and caused serious injuries to several passengers.

Despite this, concerted efforts to change the ways people use escalators have failed across the world. People just aren't prepared to change their escalator habits.

But, if you're at least prepared to hear out the argument for the standing-only escalator revolution, check out the video from Cheddar below. And for more tips on common things that you're probably doing wrong, click here. 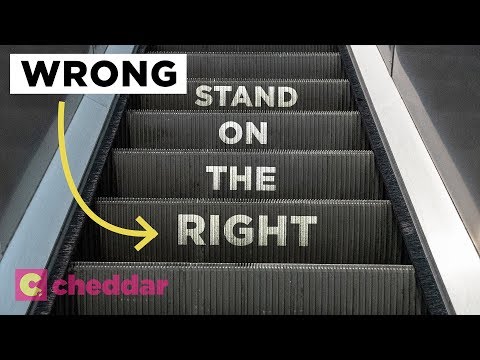 What to Expect at CanEx Jamaica